The US lost hundreds of aircraft in the China-Burma-India (CBI) theater of operations during WW II.  Most of the aircraft disappeared while transporting men and materiel over the notorious Hump route in the eastern Himalayas.  While hostile fire from Japanese forces did account for some aircraft losses (mainly in northern Burma and southwestern China), the majority of the aircraft are believed to have been brought down by severe weather conditions such as icing and hurricane-force winds.  These dangerous weather conditions often made it difficult to safely navigate the aircraft.  Many aircraft were blown miles off course and ran out of fuel before they could find a place to land, or slammed into mountains by strong winds, or stalled and dropped from the sky due to excessive icing on the aircraft surfaces.

The Aluminum Trail, published in 1989 by Chick Marrs Quinn, lists over 700 US aircraft lost in the CBI theater.  The personnel losses were far in excess of this number, as most aircraft had multiple crew members and some aircraft were also transporting passengers.  The US Dept. of Defense stated in 2004 that more than 500 US aircraft and 1,200 personnel remain missing in the CBI theater, with an estimated 416 Americans still missing in India alone.  The losses were the highest on the Hump route between airbases in northeastern India and airbases in southwestern China because that involved flying over high mountain ranges where fierce winds and extreme icing conditions were often encountered.  Most of these aircraft have never been found and their aircrews and passengers have long since been listed as MIA.  Early accident reports often declared the missing personnel as “unrecoverable”.

Our primary focus is finding missing US aircraft in the CBI theater because of the large number of losses that occurred there and the fact that they’ve been historically regarded as “unrecoverable” and have consequently been forgotten.  At the request of family members, we have also increased our search zones to include specific aircraft lost in the Yukon Territory of Canada, the Andes Mountains in southern Chile, East New Britain province of Papua New Guinea and areas in West Africa.  The purpose of each expedition is to reach, document and identify the aircraft wrecks.  Excavation of the aircraft sites by an archaeologist team will usually recover the remains of the personnel who were aboard.  Recovered remains are identified at a US government lab and then returned to the families for burial. 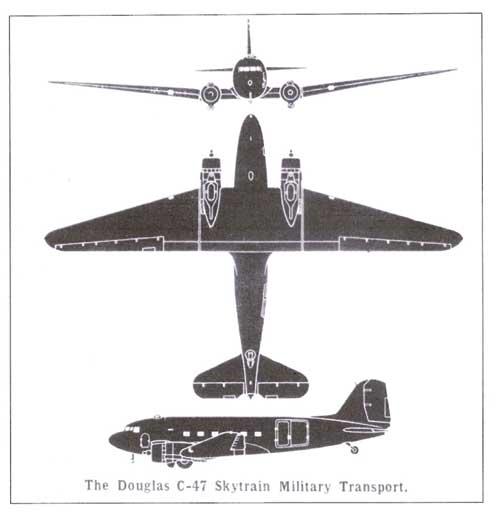 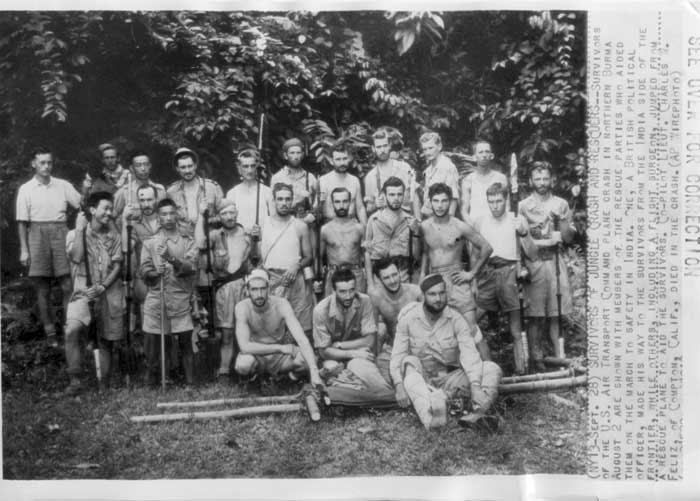 Survivors of C-46 #41-12420 crash and ATC rescue team after the aircraft crashed in the jungles of northern Burma on 02 Aug 1943 with a crew of 4 and 17 passengers aboard, including CBS News war correspondent Eric Sevareid (Rear, 5th from L.).  Capt. John L. “Blackie” Porter III of ATC Air Search and Rescue found the crashed C-46 and parachuted-in a flight surgeon and other rescue personnel along with emergency supplies.  The 20 survivors were walked out 140 miles in 10 days to British-controlled territory, beginning on 18 Aug. 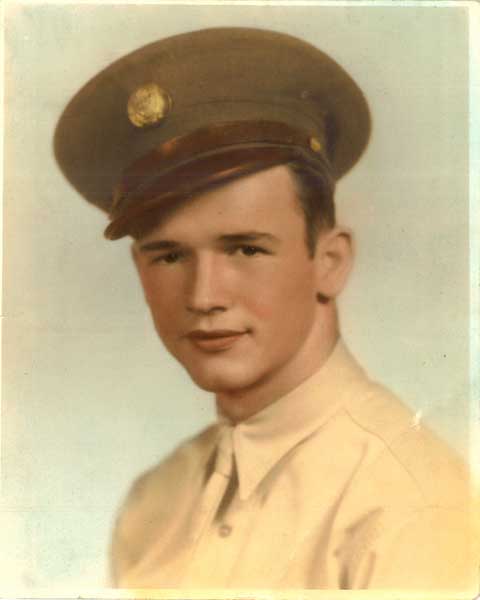 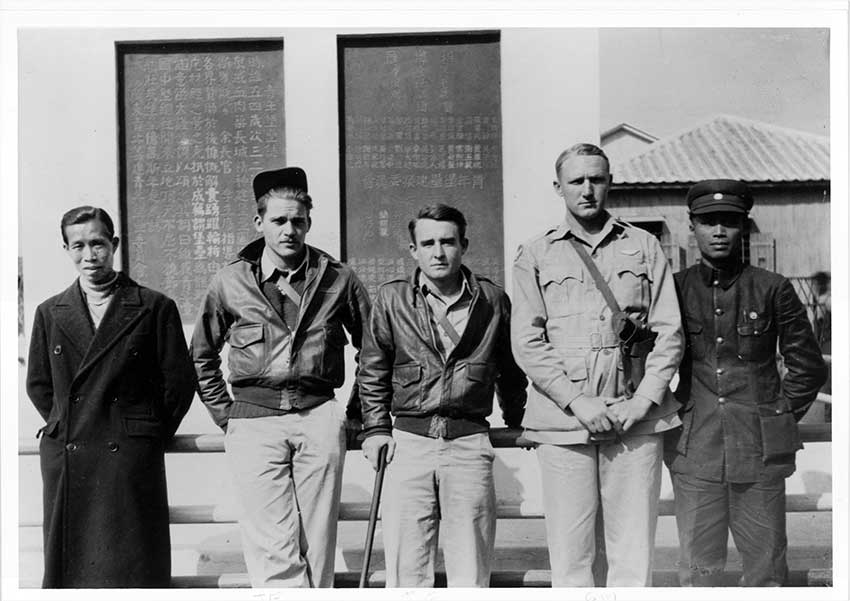 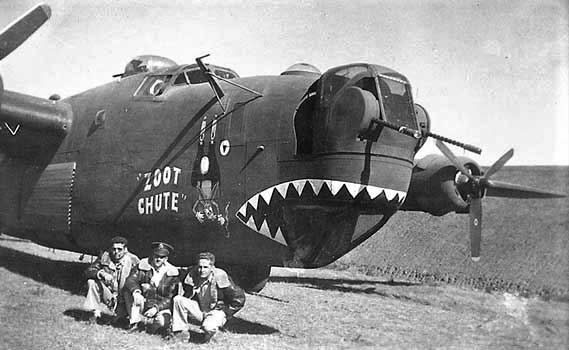 Zoot Chute in a revetment 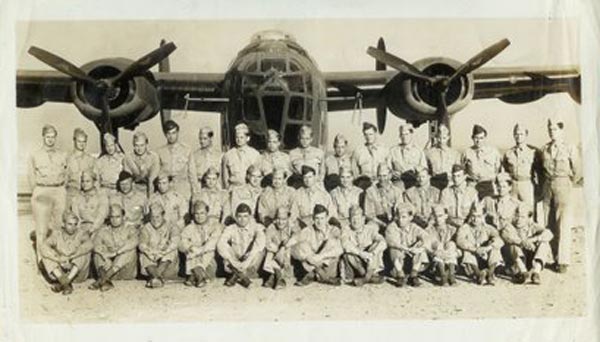 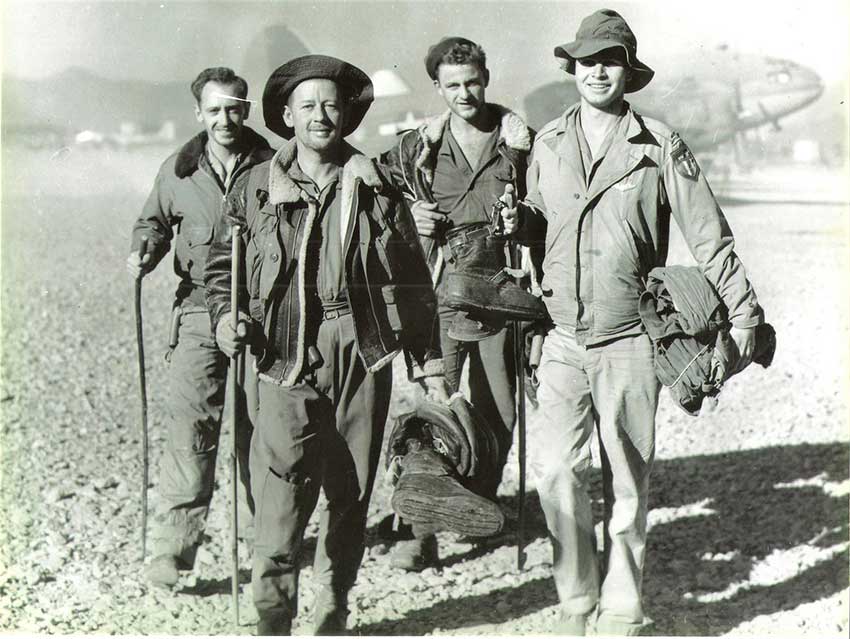 Hump airmen returning from a walkout

Click on the image below for a larger view 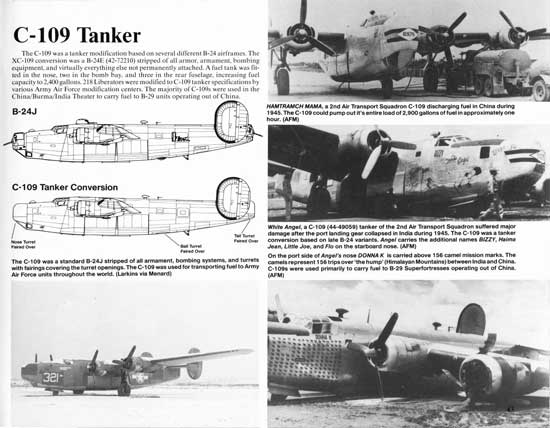 Click on the image below for a larger view 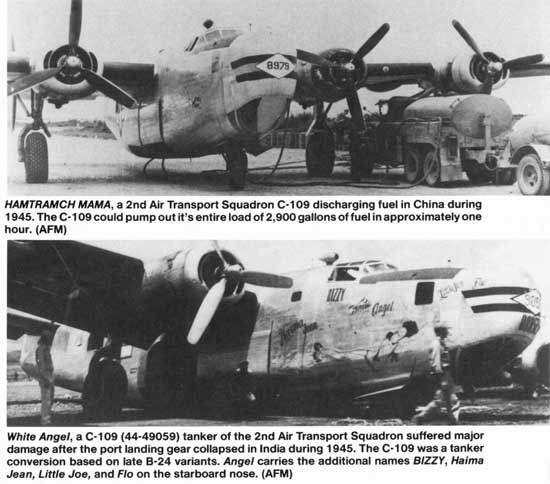 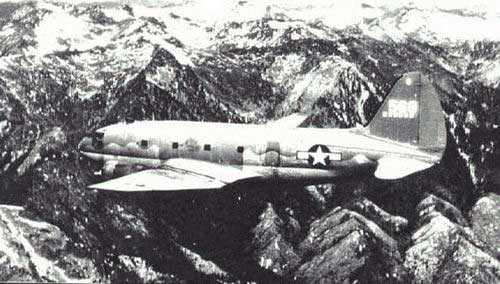 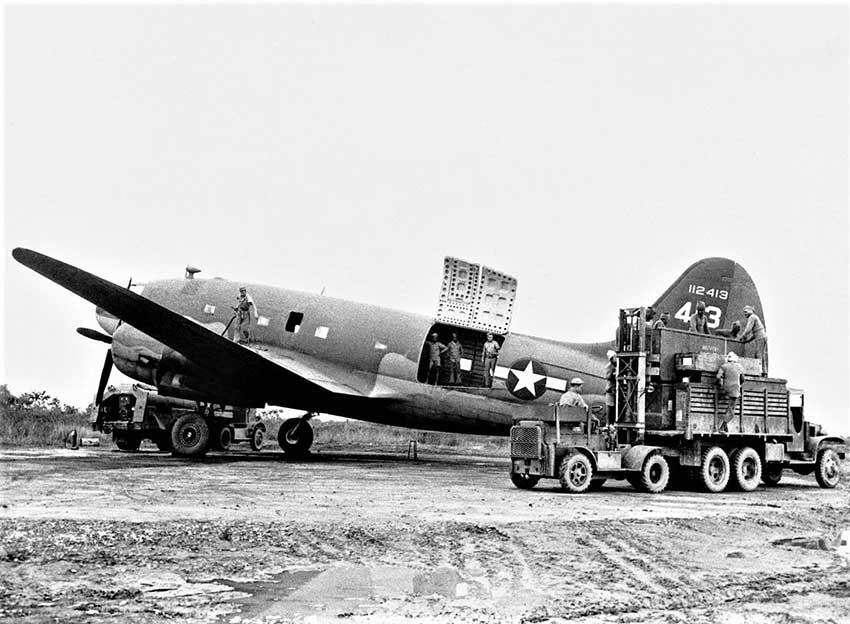 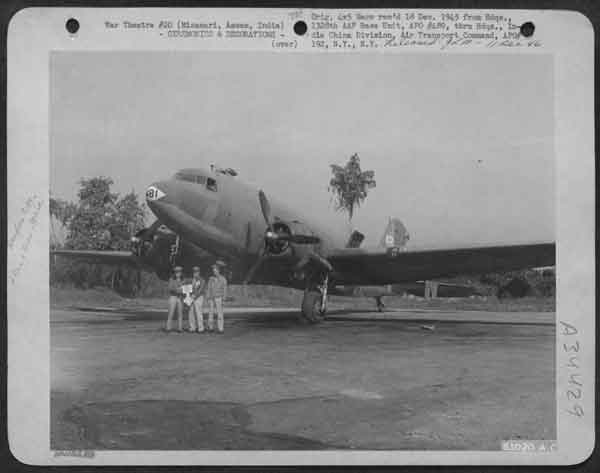 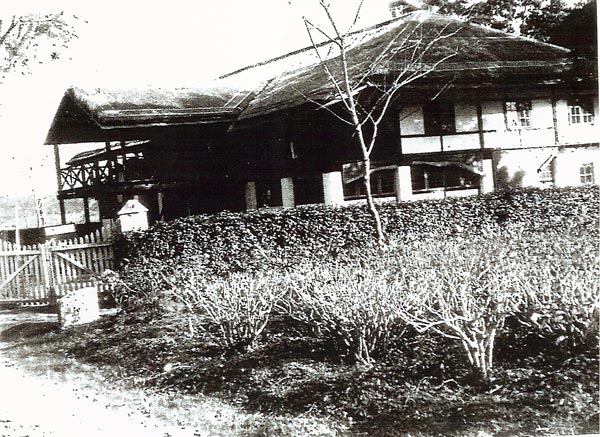 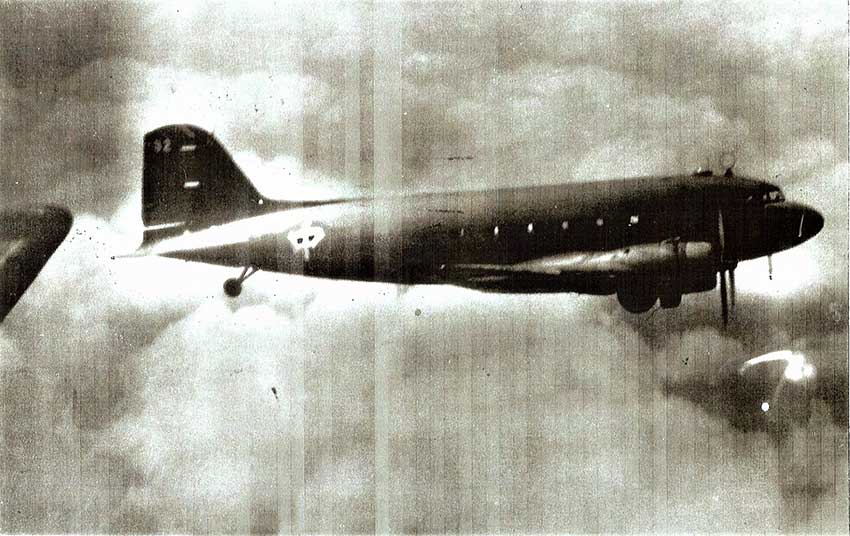 One of the grim and unpleasant tasks during and after any war, is the collection and burial of our dead.  The US Army Graves Registration Service established a US cemetery in Calcutta, India as a final resting place for those US war dead not sent back to the USA.  In November 1945, the 1305 AAF Base Unit at Dum Dum airport near Calcutta was tasked to move all US war dead in India and Burma to Calcutta for reburial.  Two C-47 aircraft were permanently assigned to this duty.  After just a few trips, these aerial hearses smelled so badly that they could no longer be comfortably or safely used for any other type of mission.  In flight, the smell was reasonably bearable for the crewmembers since windows were left open and the cargo doors were often removed.  On the ground, the smell was unbearable due to the heat.  The crewmembers frequently used wintergreen in handkerchiefs of makeshift facemasks until they could get airborne again.  In November and December 1945, a total of 890 bodies were collected from all over Burma and India and flown to Calcutta.  This required a lot of trips, since the usual load was only about 15 caskets and often less than that.

The all-volunteer aircrews who flew the initial body pickups were given an official commendation by Col. U.G. Jones, Commander of the 1305 AAF Base Unit, which said in part:
“During the month of November 1945, the 1305 AAF Base Unit was charged with the responsibility of moving from the widely dispersed and almost inaccessible areas of the Assam valley to the Calcutta area the bodies of those American servicemen whose lives had been given in our great drive for international peace.  Near Calcutta, a United States cemetery has been established where those who cannot return to their loved ones at home can rest together in peace.  The thought of those who made the supreme sacrifice having a centralized and well-kept resting place which their families might visit, was indeed pleasant.  However, all personnel involved were cognizant of the mental and physical effects the missions might have on the crews assigned to the movement, and with this thought in mind, volunteers were requested.  You volunteered for a mission totally lacking in glory and adventure; you volunteered for a task known to be extremely unpleasant.  In addition, you were cognizant of the fact that these flights would be made over hazardous terrain and that treacherous weather conditions might be encountered.  As your Commanding Officer, I take great pride in commending you and your fellow crewmembers, who during the period of 28 November 1945 to 29 December 1945, aided in the movement of the remains of 890 American servicemen.  Never before, have I seen a better display of true American spirit and efficient performance.  The fact that under these extremely trying conditions, not a single mishap occurred, amplifies and clarifies the above statement.”

This project continued up through 1948, after the CBI theater closed and all troops had gone home.  Two all-volunteer C-47 aircrews, led by Capt. Tommy Cale of Prattville, Alabama, remained during this period and flew all over Southeast Asia recovering American war dead.  When this project was finally finished, the airplanes were scrapped.