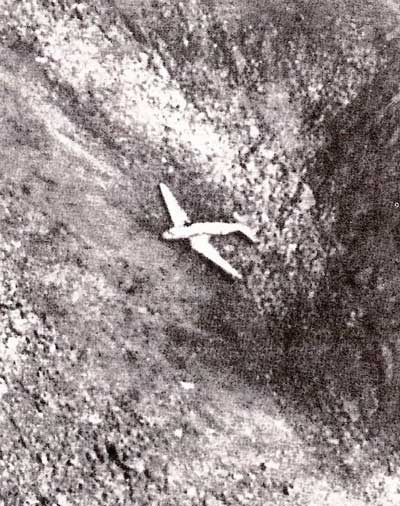 This CNAC aircraft departed Dinjan, India on 07 Apr 1943 for Kunming, China.  It was a routine cargo flight over the Hump on Able route.  Its cargo was graphite electrodes destined for an electric smelting furnace somewhere in China. As the aircraft climbed high to cross the mountains on the India-Burma border, it started accumulating a heavy load of ice on all forward-facing surfaces and was steadily losing airspeed and altitude.  Pilot, Joe Rosbert, radioed Dinjan and reported he couldn’t clear the border mountains and he needed to return to Dinjan.  He proceeded to turn the aircraft 180 deg. and set a return course to Dinjan.  The aircraft windscreen had completely iced-over as the deicing equipment was inadequate for the severe weather conditions.  Joe pressed the palm of his hand against the windscreen glass in an attempt to melt a vision hole in the ice on the outside and peered through looking for nearby mountains.  He had no sooner completed the turn, when he saw a mountain looming up directly in front of him.

With no time or engine power to gain altitude, the aircraft suddenly skimmed across the snow-covered shoulder of the mountain and skidded to a stop at almost 15,000 ft. altitude.  The impact tore off both engines and both landing gear, but there was no fire or explosion. A propeller blade had broken and came through the fuselage, striking and killing the radio operator.  Pilot and co-pilot survived the crash with injuries to their ankles.

After weeks of agonizing travel down the mountain and through rugged wilderness, they eventually reached a tiny Mishmi village in a high mountain valley E of the Lohit River.  The Mishmi villagers cared for the injured airmen until a runner could find a British survey team working along the Lohit River and bring them back to their village.  The Mishmi tribesmen then carried the airmen while accompanying the British team down to the US radio beacon station at Sadiya, India.  Dead: 1.

Note: Bolded names are those of survivors of this crash.

View video 004 for this expedition.

View video 005 for this expedition.