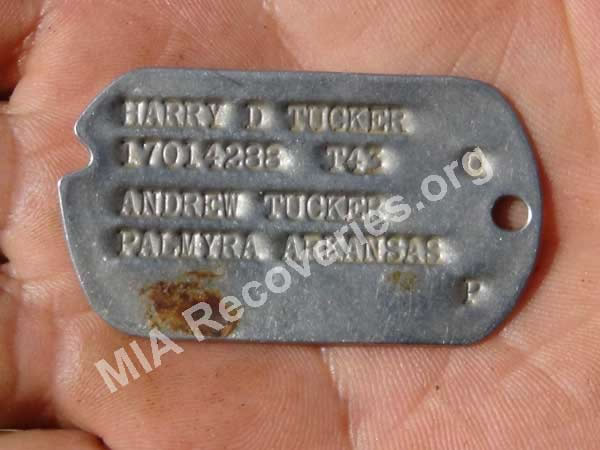 Investigator’s Note:  In early Nov 2011, I was investigating a US C-46 crash site on the Arunachal Pradesh-Tibet border in the very far NE corner of India.  While completing my documentation work of this crash site (which proved to be C-46A #41-24708), my local tribal guide told me he had heard about an aircraft crash site in the Dihing River Valley, about 80 miles SSE of our location on the Tibet border.  My guide asked me if I had the available time to reach the reported crash site in the Dihing River Valley, on the Arunachal Pradesh-Burma border.  I immediately replied in the affirmative, and my team and I trekked there after completing my investigative work at the C-46 crash site.  It involved a 9-day jungle trek to reach this crash site from the end of the nearest road.  The personnel ID tag of SSgt. Harry D. Tucker was found at the crash site, and that positively established the aircraft serial number as B-25D #41-30362.  I documented the crash site at that time, but didn’t engage in any recovery work.  I later returned to the site to engage in recovery.

On 10 Dec 1943, this aircraft was on a rescue mission over Burma when it was attacked by Japanese Zero fighter aircraft.  The B-25 tried to escape by flying westerly into India, but was pursued by the enemy aircraft.  The right engine caught fire after the main attack.  The crew feathered the propeller, but as they did that, a Zero that had been pursuing them shot out their left engine, setting the aircraft afire.  The pilot, Capt. John Porter, gave the order to bailout.  Only the co-pilot, 2nd Lt. James Spain, had his parachute on when the bailout order was given.  Lt. Spain’s clothes or parachute got caught while he was trying to exit the overhead hatch in the cockpit, and he was freed at the last moment by Capt. Porter pushing him out.  Lt. Spain reported the aircraft was entirely in flames by the time he exited, and it crashed and exploded about the time he deployed his parachute moments later.  No other crewmembers survived.  Dead: 5.

Note: Bolded name is that of sole survivor of this crash.